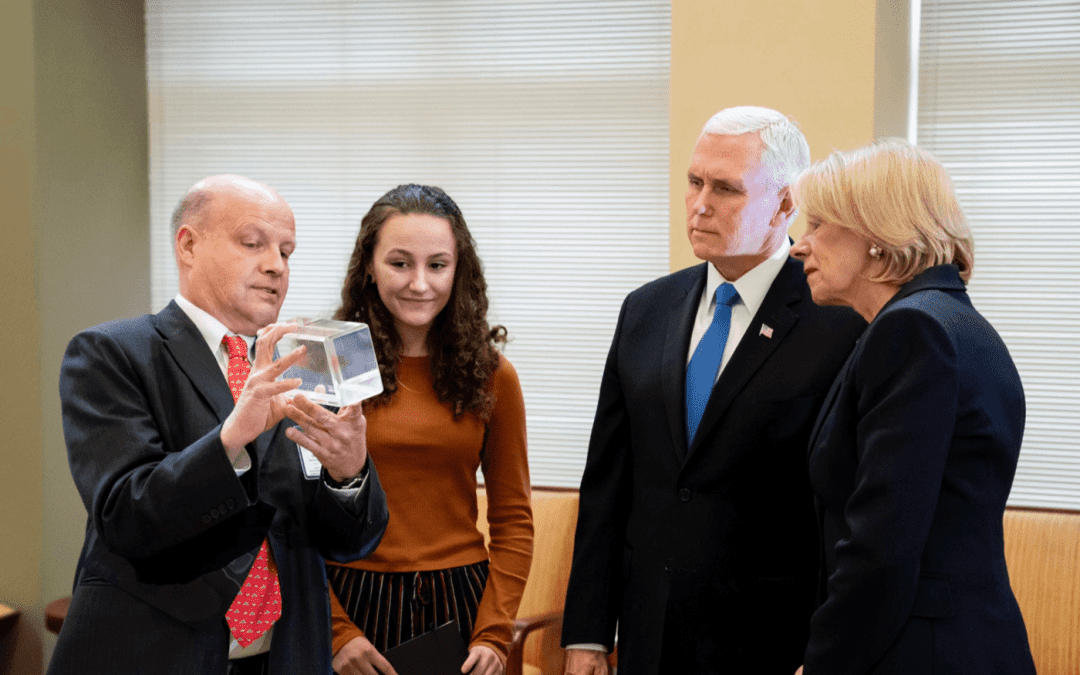 “It was an honor for Hampton University to host the Vice President of the United States, Mike Pence and U.S. Secretary of Education, Betsy DeVos at the Hampton University Proton Beam Cancer Treatment Institute,” said Dr. William R. Harvey, Hampton University President. “This life saving treatment and research center is seeing an average of 50 patients per day while easing human misery and saving lives.”

Dr Allan Thornton showed the advantages of protons to treat tumors to Vice President Mike Pence at Hampton Proton Therapy Institute using a bloc of lucite, having the same density as a human body. What’s happening in that plastic bloc is exactly what’s happening in us. It shows the precision of the beam, not only in the X and Y directions, but also in the Z direction, i.e. the depth that we can control. That is what is unique with particle therapy and in particular with proton therapy. This bloc is a very accurate representation of a treatment with proton beam.

During the discussion, the Vice President spoke about what an honor it was to be able to meet with the wonderful team and students of Hampton University. “Hampton University is an extraordinary institution. You have been making history and making a difference as a historically black college in this country,” Pence said. “Hampton University and the Proton Therapy Institute are just an incredible asset for Virginia and for the United States of America. This is an educational institution of a tremendous reputation.”

Vice President Pence spoke on HUPTI and all it has done in the last 10 years. “It’s remarkable to think about the thousands of patients who have come in here, some of whom I met today, who have literally received lifesaving innovative proton treatment for cancer. And it was scarcely 10 years ago, Dr. Harvey, that this was a brainchild of yours and of Hampton University. Thanks to your leadership and the generosity of people around the country and the excellent team you have here, you’re really changing lives. I’m looking forward to hearing more about how we can be helpful and support not only the mission of Hampton University, but specifically the Proton Therapy Institute,” Pence said.